Yesterday the Diocese of Lafia held their feast formally at Keffi. The feast was well attended by members and everyone was in a jolly mood, new members were also inaugurated to the glory of God. HAPPY FEAST DAY TO YOU ALL! 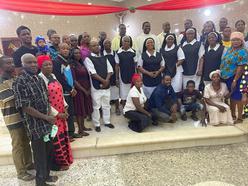 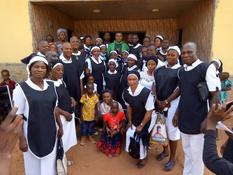 A group photograph with the officiating priest 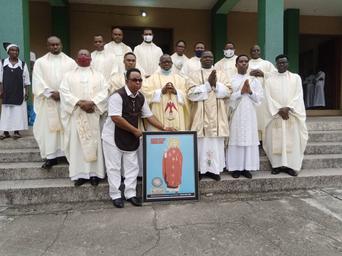 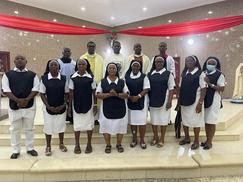 BLESSED TANSI SOLIDARITY PRAYER MOVEMENT CELEBRATES THEIR 2021 FEAST DAY IN A GRAND STYLE IN IKOT EKPENE DIOCESE
The Feast of Blessed Iwene Cyprian Tansi is celebrated every 20th of January. Iwene Tansi was born in Nigeria, Africa, in 1903. His parents were not Christians, but they sent Iwene to a school run by Catholic Missionaries. He was ordained a Roman Catholic Priest of Archdiocese of Onitsha, on 19 December, 1937. He worked in the Parishes of Nnewi, Dunukofia, Akpu/Ajalli and Aguleri. He was later a Trappist Monk at Mount Saint Bernard Monastery in England. He died in 1964, he was declared “Blessed” by Pope John Paul II in 1998 in ceremonies in Nigeria.
This year’s feast was celebrated in a grand style on the 20th of January, 2021 at St. Joseph Major Seminary, Ikot Ekpene, Akwa Ibom State. On Sunday, 24th January 2021 was the day for the Thanksgiving Mass which was celebrated by His Lordship, Most Rev. Camillus R. Umoh at St. Anne Catholic Cathedral, Ifuho. The event was colourful and well attended by members of the Tansi Solidarity Movement from the whole Diocese.
In his address, the National Promoter of the Solidarity Prayer Group, Bro. Bertrand Tansi thanked God for the opportunity granted them celebrate their Feast-day in unique way in the Diocese of Ikot Ekpene. He thanked the Bishop for accepting to celebrate the Mass of thanksgiving in their honour and they pledged to support the ongoing Retreat Centre at Nko, and gave a cash donation for the project.
In his remarks, the Chief Shepherd of Ikot Ekpene Diocese, Most Rev. Camillus R. Umoh, thanked the National Promoter of the Tansi Solidarity Movement for the steps so far. He mourned the demise of one of the Pioneer Promoters of Tansi Movement in our dear diocese, who for him was ardent in his faith. Furthermore, Bishop Umoh stressed that we should promote the right things about Tansi as he was known for his discipline and mortification.
He encouraged the Members of the Solidarity Movement to show love to one another for we are all one because the Catholic Church is universal and one. Finally, he enjoined all to pray for the quick Canonization of Blessed Iwene Tansi. 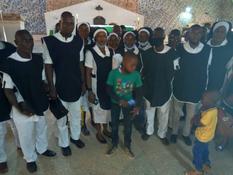