(a) CATHOLIC BISHOPS’ CONFERENCE OF NIGERIA.
“We hereby certify that the National Episcopal Conference of Nigeria sitting in Lagos on 22nd April 1982 after considering the life of Rev. Fr. Cyprian Michael Iwene Tansi OCSO thinks that the promotion of the Cause of his beatification will bring good results to our country especially in the area of Priestly spirituality. Our conference is therefore in favor of the promotion of his Cause’.
[Signed by His Grace, Archbishop Francis Arinze and His Lordship Bishop Julius Adelakun, President and Secretary, respectively, of the National Episcopal Conference of Nigeria.]

In a solemn concelebrated liturgy to close the special year for Priests held at the Basilica of the Holy Trinity Onitsha, the Catholic Bishops’ Conference of Nigeria enthroned the Blessed IweneTansi the special Patron of Nigerian Priests.

“Celebrating the year for Priests [June 19th. 2009 – June 18th. 2010] proclaimed by the Holy Father, Pope Benedict XV1, which was aptly and prayerfully observed in Nigeria; desirous to hold out models of Priesthood to encourage sacrifice, prayers and dedication to priestly life in our land; having Saint John Baptist Mary Vianney as the universal Patron Saint of Priests; we the Catholic Bishops of Nigeria, having prayerfully considered the matter, unanimously choose and hereby declare, also BLESSED

We made this declaration on this 3rd. day of June in the year 2010, on the tomb of the Blessed, in the Basilica of the Most Holy Trinity, Onitsha, Nigeria.
In testimony of which we under signed, President and Secretary of the said National Episcopal Conference of Nigeria herein affix our signatures. [Most Rev. Felix Alaba Job $ Most Rev. Alfred Adewale Martins]

With this declaration the cult of Blessed IweneTansi became more popular in Nigeria especially among priests. 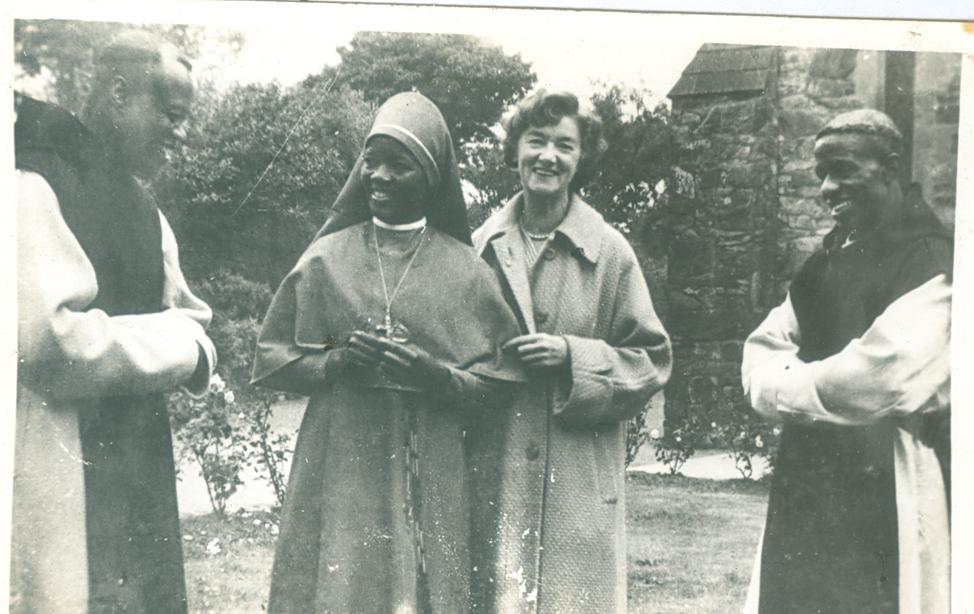 When in 1950, Fr. Iwene Tansi left a flourishing pastoral apostolate in the Archdiocese of Onitsha to become a Cistercian monk of Mt. St. Bernard abbey in England; it looked like he disappeared from his own people who were anxiously waiting for his return. In January 1964 when his death was announced in Nigeria some thought that Mt. St. Bernard has rubbed them a powerful spiritual leader, while others believed that unless a grain of corn dies in the ground it will yield no fruit. With his death the fame of his sanctity grew and spread. The first initial steps were taken by Archbishop Francis Arinze (now Cardinal) the then Archbishop of Onitsha. He made contracts with the bishop of Nottingham where Fr. Tansi died and obtained from him an authority and competence to open the cause at Onitsha. In 1962 he obtained the support of the Catholic Bishops Conference of Nigeria. In 1977 he appointed two archdiocesan priests Fr. Emmanuel Nwosu and Fr, Hilary Anisiobi as postulators to promote the cause. When Archbishop Francis Arinze was transferred from Onitsha to the Vatican, his successor Archbishop Stephen obtained from the Vatican a nihil obstat to open the cause and a permission to transfer the Cause of Fr. Tansi from the Diocese of Nottingham to the Archdiocese of Onitsha. With the appointment of the Archdiocesan tribunal the informative process was opened on June 21st 1985. Archbishop Ezeanya appointed the members of the Onitsha tribunal and the diocesan informative process was officially inaugurated by Archbishop Ezeanya in the Archdiocese of Onitsha on January 20th, 1986. Soon after the inauguration of the cause, Stephen N. Ezeanya, Archbishop of Onitsha, made a request to Rome for the remains of Fr. Tansi to be exhumed and transferred to Nigeria.

HISTORY OF HIS CAUSE

BLESSINGS OF THE HIERACHY.